Ready to go for two weeks in Czechia.

Ishmael having a drink after our flight got delayed.

A metro station in downtown Prague that serves the Municipal House, Czech National Bank, and a variety of other businesses.

The main entrance to the Municipal House.

Cubist lights on the Municipal House.

A ladybug, reveared because it eats the aphids that attack wine grapes.

A glazed tile in the basement of the Municipal House.

Andreas and Jennifer by the elevator in the bank building.

Jennifer and our guide in front of the Hotel Central.

A sitting area inside the lobby of the hotel.

The dining area, built on top of a conference room.

A statue of Sir Nicholas Winton, who rescued 669 Czechoslovak children from the Nazis.

A statue of King Wenceslas riding an upside-down dead horse by David Černý.

Stained glass with the Tesla logo, an electrotechnical conglomerate in the former Czechoslovakia.

Andreas and Jennifer by the cubist street lamp by architect Emil Kralicek.

Planters on a cubist triplex.

The view from the cafe at the top of the Dancing House.

Andreas and Jennifer at the cafe on top of the Dancing House.

The entrance door to the Art Nouveau Hlahol Building.

The roofline of the National Theatre.

The interior of the Palladium shopping center.

A door with a clock set in the transom window.

So many hiking trails to choose from!

Jennifer on steps carved into the sandstone, which we saw throughout the park.

Dew drops on a spider web.

Carved steps leading up to a vista.

Water lilies growing in a pond.

Out hiking in the mist.

The trail ducking behind a cliffside rock.

Clearing rain clouds through a gap in the trees.

A statue of the boatman Charon.

A neatly arranged collection of skulls.

A pillar of skulls and femurs.

An enormous collection of human bones.

A delicious selection of street food.

Looking up at the church ceiling.

Looking out over Brno from one of the church spires.

A modern building that resembles a locomotive.

One of two academies of music and the dramatic arts in the Czech Republic.

Looking out over Klentnice while hiking.

Looking up at Sirotčí hrádek.

The ruins of Děvičky castle.

Enjoying a beer before dinner.

A classic villa in the garden district.

A villa with a sunroom. 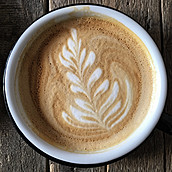 Relaxing and enjoying our coffee.

The house that Slovak architect Dušan Jurkovič built for himself in Brno.