Ready to go for two weeks in Scotland.

One of the multi-faceted mirrors responsible for scattering light from ground-based lights.

A sampling of the tremendous variety of ferns on display, including Dicksonia antarctica.

Purple Shamrock, a type of oxalis.

Three plant leaves that have looped together.

Looking up at the branches of a Monkey Puzzle Tree.

The Kibble Palace conservatory, which dates back to 1873.

The Queen Margaret Bridge over the River Kelvin.

Some of the wide selection at Valhalla's Goat.

Some of the delicious wares for sale at Demijohns.

Recycling bins waiting in the alley.

The lion and unicorn staircase.

The view down St. Vincent St.

Jennifer on the spiral staircase to the top of the lighthouse.

The view from the top of the lighthouse.

Surveying the entrance to the building.

Gazing off the balcony.

Figures holding up a balcony on Argyle St.

Honey I shrunk the kids.

The world's most economical taxi.

The clock and train schedule.

A hotel overlooking the interior of the train station.

Stepping into a police box along Buchanan St.

A partial taxonomy of Glaswegians.

The view toward the west front from the choir with the organ pipes visible at the crossing.

Looking down the nave of the cathedral.

One of the many rows of tombs at the necropolis.

The gated entrance to a tomb.

Glasgow Cathedral from the Necropolis.

Cruising down the A82.

The exterior of the main staircase.

The Hill House from the front garden.

A typical trail for the Glencoe area heading into the mountains.

A solitary tree in the lost valley.

Looking across the lost valley.

Jennifer descending into the lost valley.

A grove of moss-covered birch trees.

Jennifer descending back toward the parking area.

Looking up the Beinn Fhada ridge.

Looking toward Dalness with Loch Etive visible in the background.

Jennifer and Andreas at the high point of Lairig Gartain.

Jennifer partway up Beinn a'Chrulaiste with Lairig Gartain in the background.

Owls at the top of Beinn a'Chrulaiste.

Andreas and Jennifer at the top of Beinn a'Chrulaiste.

Andreas at the top of Beinn a'Chrulaiste.

A toad spotted on the way up Beinn a'Chrulaiste.

The rugged coastline below.

A new friend met while out hiking.

The view toward the sea and an abandoned cottage.

Jennifer ascending a series of switchbacks.

A pair of goats wandering close to the edge of a cliff.

A sea of bluebells.

One of the barley malting areas.

A peat fire adding the characteristic smoke flavor to the malted barley above.

Warehouse #1, where some of the whisky casks are aged.

The console for pumping ingredients between stages of the whisky-making process.

The mash tun, where starch from the malted barley is turned into fermentable sugars.

The fermentation vat for turning wort into beer.

The console for mixing and monitoring the outputs of the four spirit stills.

Andreas as the source of Laphroig's water.

A look at the peat cutting trench.

Inside warehouse #1 to see aging barrels.

Our tour guide pulling a sampling from a sherry cask filled in 1998. 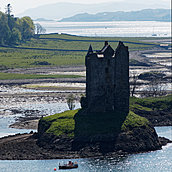 Planning an attack on the Castle of Aaaaarrrrrrggghhh.

A castle from the 13th century to defend against Norsemen.

Ripples on the surface of the creek.

One of the many small waterfalls.

Stones under the water's surface.

The Fairy Pools from afar.

A pair of standing stones of unknown origin.