Jennifer with our luggage for a week in Paris.

The conservatory, which was sadly closed for renovations during our visit.

A footbridge in the Albert Kahn Gardens.

An angular stone wall along the bank of the stream.

Decorative stonework along the stream.

It's a thing to paint your truck in Paris.

A bank of chargers and cars.

Jennifer at one of the many gateways along La promenade plantée.

Jennifer with her purchases at a gluten-free bakery.

Side windows in Sainte-Chapelle.

Looking up at the ceiling of Sainte-Chapelle.

Chandeliers hanging near the windows of Sainte-Chapelle.

A statue illuminated by colored light from the window.

Owls trying out glasses at the Bodum store.

Out front of the Palais Garnier.

One of the gilded statues on top of the Palais Garnier.

The main staircase in the Palais Garnier.

Looking across the Grand Foyer of the Palais Garnier.

The ceiling in the Grand Foyer of the Palais Garnier.

Looking across the Palais Garnier auditorium.

The Cézanne painting around the dome of the Palais Garnier auditorium.

A chandelier and decorative ceiling in one of the side rooms.

Oysters for sale at a street market.

The grave of Urbain Jean-Joseph Le Verrier, who calculated the orbit of Neptune based on observations of Uranus.

The Tiffany glass dome in the main Galeries Lafayette store.

Looking across the area covered by the dome.

Details along the edge of the dome of Galeries Lafayette.

Paris rooftops from the top of Galeries Lafayette.

People enjoying the afternoon on the Galeries Lafayette rooftop patio.

Details in the Tiffany dome.

These three-wheeled Piaggio MP3 scooters were all over paris.

The Eiffel Tower at twilight.

Standing under the Eiffel Tower.

A flower covered with morning dew.

A flower about to open. 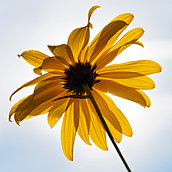 Looking down a row of flowers in Claude Monet's gardens.

Jennifer in Gare Saint-Lazare after our return from Claude Monet's house and gardens.

Jennifer by a section of the Paris city wall.

Lunch along the Seine.

Iris windows on the side of L'Institut du Monde Arabe.

A balcony garden in the 5ème arrondissement.

A living wall above one of the entrances to BHV.

A street performer entertaining people in front of Centre Pompidou.

Escalators running up the side of Le Centre Pompidou.

The artist work and exhibit space at 59 Rivoli.

Traffic in front of the Louvre.

The view from Pont Alexandre III at dawn.

One of the statues on Pont Alexandre III.

Looking up through an archway in Église Saint-Sulpice.

Jennifer and Irene in the spacious elevator.

Decorative lamps for sale at Kartell.

A selection of tables for sale at Kartell.

An antelope looking out the window at Deyrolle.

Looking into the living room from the dining room.

The dining room where we stayed.

One of the four bedroms.