Jennifer with our luggage for the trip.

Sheep grazing by a small waterfall in the rhyolite hills.

A creek snaking through moss-covered hills.

A hardened lava flow in the rhyolite mountains.

A pool of mineral-laden water.

Moss growing on the weathered rhyolite.

The Milky Way over the mountains.

Looking south from Hrafntinnusker Hut, with the trail visible on the left.

Looking out from the interior of the ice cave.

A plane dotted with geothermal vents.

Hikers on the Laugavegur trail.

A snowy mountain and creek that we passed on the trail.

Passing by a Entujökull, one of the outlet glaciers of Mýrdalsjökull, on the Laugavegur trail.

One of the many glacial streams formed by Mýrdalsjökull.

Looking upstream at sunset on the Krossá glacial river toward Mýrdalsjökull.

Andreas by a glacial stream in Þórsmörk.

The Milky Way and a meteor over Eyjafjallajökull.

Looking back toward the Þórsmörk huts from the start of the Fimmvörðuháls trail.

Jennifer on one of the lower points of the Fimmvörðuháls trail.

One of the many creeks flowing off Eyjafjallajökull. The Fimmvörðuháls trail is visible in the top center.

Jennifer standing on a narrow section of trail.

A creek spilling off one of the outlet glaciers of Mýrdalsjökull.

One of the outlet glaciers of Mýrdalsjökull.

Lava from the 2010 Eyjafjallajökull eruption.

Looking toward Þórsmörk from the Fimmvörðuháls trail.

Jennifer pausing by Móði, one of the craters formed by the 2010 eruption of Eyjafjallajökull, in rapidly deteriorating weather.

Jennifer on the final push to the Fimmvörðuháls hut.

Jennifer in a layer of ice after getting caught in a storm on the hike to the hut.

Looking outside during the storm. 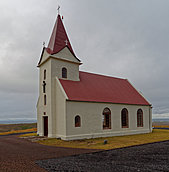 Christopher Columbus is thought to have studied Viking accounts of the new world in 1477 near the location of this church.

A small waterfall with Kirkjufell in the background.

A Unimog with solar panels on the roof.

Andreas at Kaldalónsjökull, one of the outlet glaciers of Drangajökull.

Spots of color from the autumn foliage.

Our Mitsubishi Pajero in the parking area.

A small church on the edge of the fjord.

An abandoned boat on the bank of the fjord.

Jennifer relaxing in 40°+ C water from a geothermal spring after a long day of hiking.

Horse tenderloin with a variety of sides.

An aurora dancing in the midnight sky.

A brilliant aurora shimmering over the bay.

The base of the main drop of Dynjandi.

The road leading off into the distance.

Harpa lit up at night.