Jennifer with our luggage for a week in Portland. 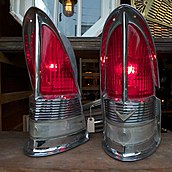 A mural advertising the attractions within. 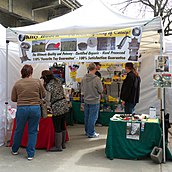 This man had an accident in the kitchen.

Making coffee one cup at a time.

Who wouldn't want an owl purse?

A street magician tricking the audience.

Just walking down the steet with a barrel of radioactive waste.

Andreas getting ready to check out some fine spirits. 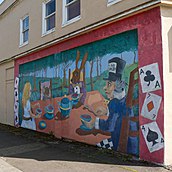 A tea party outside Longfellows Books.

The owner with his fine German still.

Jennifer chatting with one of the bartenders in front of the amazing live display of beers on tap.

A fun selection of lighting, furniture, and accessories.

A good haul from the local distilleries.

Ferns and moss growing on a tree limb.

The largest mausoleum at the cemetery.

Owls in the hollow of a tree.

Steps covered in moss and blossoms. 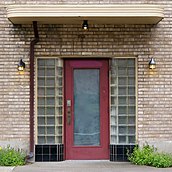 A neat front door to an apartment building.

Jennifer tucked in a trio of tree trunks.

Mount Hood off in the distance.

Lee eyeing the delights for sale.

It's important to pay attention walking around this store.

How did we not take home this beautiful mid-century lamp?

A collection of control and readout systems.

This classic bulb was radiating far more heat than light.

A sample of the lamps available for sale.

A technician rewiring a chandelier.

A neat building at the corner of Burnside & 6th.

A dragon on the roof of the entrance.

Moss growing between the stones and tiles. 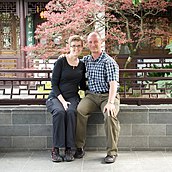 Jennifer and Andreas in the garden.

People chatting on one of the bridges.

Coffee from the Powell's cafe.

Looking down one of the hundreds of rows of books.

Jennifer giving Dracula a run for its money.

Andreas and Lee in infra red.

A loaded tube in the fore torpedo room.

Dials and controls in the engine room.

A piston and connecting rod from the diesel engine.

Tourists checking out the waterfall.

The base of the waterfall.

A tourist photographing the waterfall with his iPad.

The goddess of leisure.

A selection of classic vacuum cleaners.