A fire truck coming down the street sideways.

The Joker on parade.

A woman with a bright red parasol.

My, what big horns you have!

Pirates looking lustily upon booty for the taking.

A demon of some sort.

What's a parade without an evil clown?

Spartans and Persians preparing to rumble.

A Hogwarts student casting a spell on the photographer. 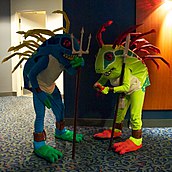 A pair of armed fish-like creatures.

Pyramidhead waiting in line to buy a Dragon*Con ticket.

An HF radio fit into an Altoids tin.

A wizard perusing the Dragon*Con program.

Looking up into the atrium of the Hyatt Regency.

A lady with a really big gun.

Convention staff consulting on the schedule.

A woman hanging out in a gas mask.

Batman responding to an urgent message.

I was touched by her noodly appendage!

A lady selling leather and steamunk acessories in the Brute Force Studios shop.

Pinhead with a Lemarchand box.

A guest checks in while the Penguin, Joker, ???, Poison Ivy, and Harley Quinn stomp Batman.

Wonder Woman and a white-clad superheroine.

Multiple levels in the Marriott Marquis.

The cast of "Jesus Christ Superstar" in front of a wine display.

A collection of superheros. 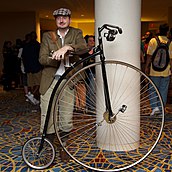 Mr. Freeze in his cryogenic suit. 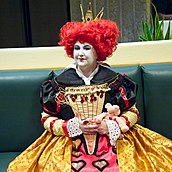 The Queen of Hearts.

Not quite sure who this is.

A barbarian at the bar.

A robot about to run down the photographer.

A woman with a phesant on her head.

Harley Quinn and the Joker.

Portrait of an angel.