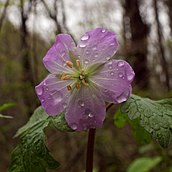 Rain droplets on a wild geranium.

Close-up of a blue phlox flower.

A bunch of golden ragwort flowers.

Part of the waterfall near the trailhead.

A millipede crawling toward a decumbent trillium.

A mayapple poking through the leaves.

A ladybug crawling across sandstone.

Left to right: Jennifer and Ina strike a pose with McLemore Cove in the background.

Jennifer posing next to an owl.

A dead tree lying next to the trail.

A bloodroot flower starting to loose its petals.

A bloodroot enjoying a sunny afternoon. 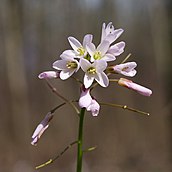 A collection of cut-leaved toothwort flowers.

A bloodroot cradeled in its leaf.

Leaves stacked together by flowing water.

Left to right: Ina and Jennifer hiking along the trail. 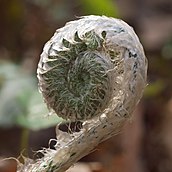 A fern starting to unfurl.

A bunch of muddy hiking boots.

Virginia bluebells on a sunny day.

A couple of virginia bluebells.

Looking up at several bellwort flowers.

Redbud blossoms backlit by the sun.