Sunset from our apartment.

A group of sandpipers looking for lunch.

Head shot of a parrot.

A parrot showing off its beautiful plumage.

Jennifer standing next to a traveller's palm tree.

A very colorful duck paddling around the aviary.

Several trees growing on top of a rock.

Roots flaring out from the base of a tree.

Detail of a palm leaf.

Jennifer sitting outside some karst formations.

Left to right: Andreas and Jennifer during a hike.

Jenifer standing near the base of a tall palm tree.

A millipede weaving its way through the thorns on a tree trunk.

Two owls posing with the Atlantic Ocean in the background.

Sunset from the porch of our apartment.

A fellow greeting us at the construction site.

Looking at the trees surrounding a gazebo.

An antique doorway imported from India.

Left to right: Derrick and Jennifer checking out an upstairs loggia.

The capital of an antique column from India.

A large pool in the final stages of construction.

The carved ceiling of an antique Indian gazebo.

A gazebo surrounded by water.

The lone fellow working during lunch at a hotel overlooking the Caribbean.

Andreas's feet in the surf.

A dark cloud obscuring the sun.

Jennifer relaxing on the beach.

A warning sign at the entrance to the Barbados Wildlife Reserve.

A maras sitting by one of the walkways.

A peacock perched on a low tree branch.

Wrought-iron scrollwork forming a window in an exhibit area.

A mudskipper peering up through the surface of the water.

Head shot of a Cuban iguana.

A pair of love birds.

A mouthstash perched at the entrance of its home.

A monkey napping on the ground.

Jennifer and a new friend.

Monkeys and a tortoise packing into a feeding station.

A young monkey hiding behind a tree branch.

A couple of monkeys wrestling on a park bench.

A caiman floating on the surface of a pond.

A tortoise and two owls.

Getting down low with a tortoise. 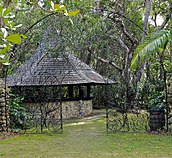 The entrance to the Grenade Hall Forest & Signal Station.

A bearded fig tree, which may have given Barbados its name.

A bleached-out crab exoskeleton lying on the rocks.

Left to right: Andreas and Jennifer standing in the surf.

Jennifer cooling off in the ocean.

Jennifer playing in the surf.

A sea arch and multiple levels of surf.

A tiny crab scrambling across the beach.

Two owls at the beach.

Water shooting up through a hole in the coastline.

Water shooting up through a hole in the coastline.

A wave breaking over an offshore rock.

A tiny crab peeking out of its shell.

A panoramic view of the Soup Bowl.

Water rushing in around a sculpted rock.

Near-infra-red photo of a rock and the shore.

A tiny visitor to our apartment.

A silvery fish checking us out.

A sea urchin in its underwater home.

Loading up our rental car for the drive to the airport.