An owl encrypting a message using a three-rotor Enigma.

A Japanese cipher machine called Purple that was cracked by the Allies prior to WWII.

A Japanese cipher machine referred to as Jade by the Allies. 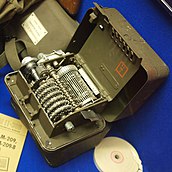 Blinking lights on a Connection Machine.

The arm of a StorageTek tape archive filing a tape.

An owl hanging out on a retired Cray XMP-24 supercomputer.

The passive microphone used to eavesdrop on the American ambassator's residence in Moscow.

The Great Seal of the US in which the Soviets hid a passive microphone.

A mock-up of SIGSALY, an unbreakable voice encryption used by the allies in WWII.

A mock-up of the precision turntable system used to provide the keystream for SIGSALY.

A pair of early secure telephones.

An American SIGABA cipher machine, all of which resisted Axis cryptanalysis during WWII.