Jennifer with our two-weeks-worth of clothes and camera equipment.

Stained glass windows at the roofline of the church.

The interior a store specializing in Chinese and Japanese antiques.

The Eiffel Tower at night.

Café de Flore, a site of the existentialist movement during the early 20th century.

Several members of the sales staff.

Andrea among some of the taxidermy animals at Deyrolle.

A very long moving walkway linking the RER and Metro portions of the station.

A painted construction fence protecting the area around a building undergoing renovation. 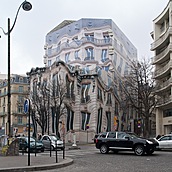 This construction facade was made from photographs of the original building to hide the work in progress.

Left to right: Jennifer, Andrea, and Lee checking out a Smart to be auctioned off at Artcuriel.

One of the the statues by the southern fountain.

The proper way to display €240 jeans.

One of the gilded statues on the roof of the Paris Opera.

Detailed ornamentation at the bottom of the Tiffany dome.

The Tower of Babel by Janine Janet.

The Eiffel Tower and a cherub from one of the museum windows.

Jennifer posing in the courtyard of the Palais Royal.

Lee hiding from the wind in a guard post.

A pair of illuminated planters outside a floral shop.

A building with a metal exoskeleton.

A didgeridoo and drum player in the Paris Metro.

Left to right: Jennifer and Andrea consulting a cemetary map and "Permanent Parisians".

A statue of François-Vincent Raspail's wife reaching into his mausoleum.

A small purple flower growing on one of the mausoleums.

A collection of mausoleums.

Andrea placing a pair of lilys on Oscar Wilde's grave.

Lee checking out the interior of a mausoleum.

Left to right: Lee, Andrea, and Jennifer on the steps to the Basilica.

The Moulin Rouge and the Blanche metro entrance.

A typical breakfast at our apartment.

Anyone need a dugout canoe?

A cast-iron statue of Cthulhu.

A selection of human skulls.

An incredibly cool art deco lamp for sale at one of the shops.

Gérard Mulot, the finest patisserie in all of Paris.

Looking under Eiffel Tower toward the École Militaire.

The moon and the Eiffel Tower seen from the Trocadéro.

Lee holding the worst coffee in all of France.

Shops in one of the covered passages.

A selection of fine copper cookware.

Colored light on the floor of the church.

Sunlight streaming through a stained-glass window.

One of the stained glass windows in Église Saint-Eustache.

A pair of stylish teapots on display at the Bodum store.

Andrea & Lee checking out the human hamster tube running up the side of the building. 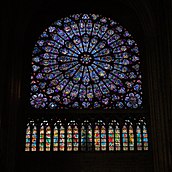 One of the rosette windows near the roof of the transept.

Stained glass windows at the roofline of the church.

A pair of gargoyles keeping an eye on the tourists.

Left to right: Lee, Jennifer, and Andrea in the courtyard of Notre Dame.

The full moon beside the Pantheon.

The automatic irises to control the light passing through the windows.

Looking across the main dome of the Panthéon from one of the balconies.

The Eiffel Tower and Invalides through a haze of Gitanes smoke.

Looking up at one of the side domes.

Andreas cooking dinner with the gas/electric La Cornue stove in our apartment.

The château in the middle of Foix.

Jennifer at the parking lot for the hike to Château Montségur.

Jennifer on the trail to the château.

Two owls perched on the side of the château.

The château shrowded in mist.

The remnants of the château's interior.

Clouds catching the last rays of the sun.

A hummingbird hawk-moth feeding on some flowers.

A pair of owls about to be locked up in the dungeon.

Jennifer standing by a row of columns beside what used to be an open-air garden and swimming pool.

The remains of several dining rooms and atriums.

Jennifer hiking up a trail near Gargas.

The back of Notre-Dame de Paris at twilight.

Jennifer posing next to Saint Germain.