A walkway alongside the church leading to the cemetery.

A cove on the east coast of Barbados.

Jennifer washing her feet after wandering around on the beach.

A sculped rock along the shoreline.

A lion carved out of coral rock.

Seawater blowing up through The Spout.

Waves crashing onto the shore near The Spout.

A pair of birds roosting above a balcony.

A rainbow touching down near Speightstown.

Looking out towards the west coast.

Looking out over Chalky Mount and the east coast.

The last working windmill on Barbados.

Close-up of a white orchid.

A cluster of small red flowers.

Looking up at the roots of a Bearded Fig Tree.

Yellow flowers on a small tree.

A view out over a small cove.

The storefront for Earthworks Pottery.

One of the warm-up cannons used on the HARP project.

A 5-inch cannon from the HARP project.

A school of blue fish. 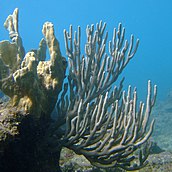 A silver fish swimming toward the camera.

Two different types of sea fans growing next to each other.

A sea urchin on the ocean floor.

An underwater self portrait.

Brightly colored algae around The Spout.

Jennifer holding onto her hat during a stiff breeze.

Jennifer sitting at the edge of an opening down to the ocean.

A shallow pool of brightly-colored seawater.

A troop of monkeys crossing the road.

A back road in northeastern Barbados.

The interior of the Cheapside Public Market.