I had been shooting an E-500 with a variety of high-grade lenses for over a year when my E-3 arrived in the mail the day after its US release. The focusing seemed wonky from the get-go, and I emailed my first tech support inquiry a few weeks later from Barbados after we'd come home from a day of exploring to find a bunch of mis-focused photos. This was most noticeable with the 50–200 f/2.8–3.5, which has a relatively shallow depth of field.

These emails went back and forth for several months, with Olympus tech support suggesting different focusing modes, focus point sizes, cleaning the contacts, resetting the camera, cleaning the AF sensor, and similar fixes. None of these things helped. Even so, the problems were intermittent, and I thought that I was doing something wrong. My E-500 had also never misbehaved in this manner. I always had the E-3 set to focus priority, and it indicated focus lock before taking the picture. But I’d get home, bring up the pictures from the day in Aperture, and some of them were anything but focused. I started paying close attention to the viewfinder image after this occurred a few times and began noticing the camera mis-focusing even after it indicated focus lock.

The real wake-up call occurred during my first wedding shoot for friends that run a studio. Wedding photography involves high-pressure, low-light photography with little room for error, and the camera absolutely fell apart in these circumstances. They hired me based on a shoot I did with them using my E-500, and I think that they had serious concerns after seeing the photos from my E-3: many of them were poorly focused, and I was seriously embarrassed by the results. Good think that I was the second shooter! It was similarly disappointing visiting the Atlanta Botanical Garden with a friend that shoots a Nikon D2x. Both of us were using Sigma’s 150 f/2.8 macro. In some of the more dimly lit areas (~LV 6), my E-3 would rack the lens in and out several times before giving up on trying to focus. My friend’s D2x nailed focus within a second or two.

At this point, I put the camera on a tripod, shot a few pictures of a typewritten page using the remote that showed the camera mis-focusing, and sent the camera to Olympus service with those pictures. The test involved mounting the camera and 50–200 f/2.8–3.5 on a tripod about three meters from a typewritten page hanging perpendicular to the lens axis, defocusing the camera, and triggering the shutter with the remote. The camera was set to focus priority with anti-shock enabled and the interior lights varied across a range of brightnesses. Olympus said that they couldn't find anything wrong with the camera but cleaned the AF system and loaded new firmware.

The camera didn't focus any better after this, and I once again put it on a tripod and shot 100+ images of the focus test chart placed about 50 cm from the sensor in a range of lighting levels (EV 2 to -2) with the 14–35 f/2.0 on 9 May 2008. The results weren't pretty, and I sent them in with the camera. The camera focussed within two or three cm of the target at EV 2 and 1, and things fell apart at EV 0 and below with the camera wildly missing the mark. Olympus said that the test chart gave misleading results and nothing was wrong with the camera—it passed their tests with flying colors. However, they sent me a new body due to all the trouble I was having with mine. This was at the end of May 2008.

I pulled the camera out of the shipping carton, installed a battery and CF card, attached the 14–35 f/2, put the focus point on the bridge of my wife’s glasses, and proceeded to make photos like this on 23 May 2008: 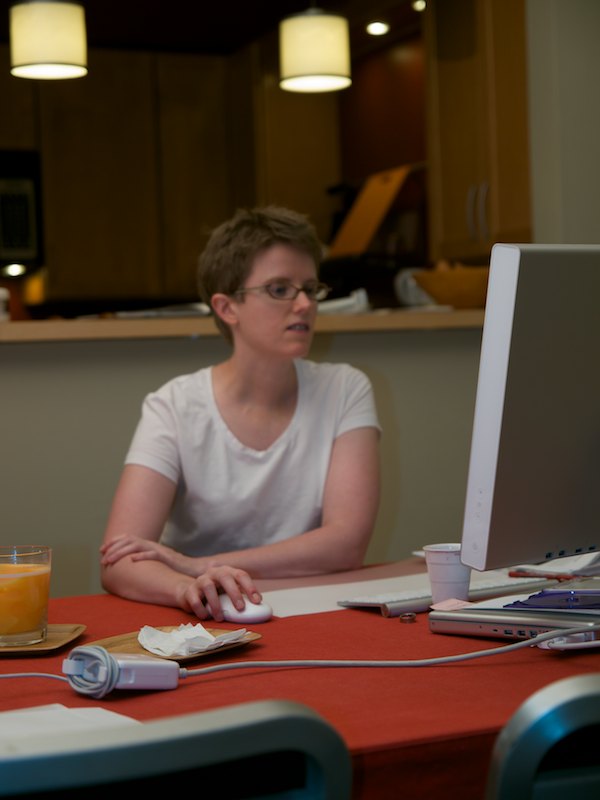 So the new body didn’t focus any better, and this was hammered home during an after-work portrait shoot with the 14–35 f/2.0 in July 2008. Out of ~250 images, only ~25 were in sharp focus, and I credit MF override for most of them. The rest were off by a few cm. I had read as much as I could find on autofocus systems by that point, including this tutorial, and was consciously keeping the active focus point on a high-contrast edge like the edge of his eye or the bridge of his glasses. None of these things helped. I often got a focus confirmation in the viewfinder when the image was clearly mis-focused, and letting up on the shutter release and recomposing didn’t fix the problem. I consider this simply unacceptable performance for any camera/lens combination, let alone a $1800 camera and a $2200 lens one.

I found that the camera focused better on some days than others. It always seemed to miss to the front, and the error appeared related to the light level: the brighter the light, the closer to correct focus it got. Indoors, in dim lighting (~LV 6), it would miss by a 50+ cm, but it was usually only off by few cm in good light. But even that degree of error ruined too many pictures.

It was interesting comparing my E-3 with friends' D300s. The D300’s AF system is in a completely different league than the E-3’s: it rapidly locks focus in any kind of light and will track moving subjects in light levels where the E-3 simply thrashes, such a bride walking down the aisle or people dancing at a wedding reception. Even my mom’s Canon 40D with a cheap, slow, consumer zoom spanked my E-3s with high- or super-high-grade glass.

Olympus said that they had tested the second body before they sent it to me but sent a third body after reviewing several wildly out-of-focus sample pictures from the second one. That exchange left me without a camera for the weekend, and I used that time to plot out a switch to a Nikon FX system. I was in the midst of selling all my Olympus lenses, flashes, and accessories to fund that switch by the time the third camera arrived. I verified that the replacement E-3 powered up and operated before putting it up for sale as well.

I credit Olympus support with a quick, courteous response to all of my inquiries and a genuine interest in helping me resolve these problem. Olympus service consistently delivered repair turn-arounds in about a week. Too bad they couldn’t get the camera focusing properly. But I’m left thinking that Olympus really needs to rethink their AF test procedure, as it’s simply not indicative of how the camera performs in the real world.

Plenty of folks have complained about the poor AF performance of their E-3s on various online forums. Other folks are pleased with the performance of their E-3s, and some of them had problematic cameras in the past. I’m not sure if Olympus has a widespread quality control problem with the E-3’s AF system or whether I was seeing its true AF performance and the satisfied customers either have low expectations or aren’t pushing their cameras that hard (e.g., not shooting low-light event photography).

I’ve traded emails with over a dozen E-3 owners, including the fellow that purchased my E-3 (this was his second body, and he was having AF trouble with the first). All of us had sent our cameras to Olympus one or more times to be tuned to factory specs and didn’t see any improvement in AF performance. Most likely, we’re seeing its true performance, which simply isn’t that good. To this day (24 April 2011), I regularly receive emails from visitors to this page stating that they’re seeing the same performance in their E-3 that I saw in mine and asking for advice. I tell them that they should get what they can for their 4/3 gear and buy a Nikon or Canon.

Sample discussion forum threads on this topic from around the time I punched out of 4/3 are here and here.

I since photographed over twenty weddings with my D700 and various lenses, and they performed like one would expect high-end gear to perform. Out-of-focus pictures simply weren’t an issue. The problem evidently wasn’t located a few cm behind the viewfinder.

I found the autofocus section of this article interesting, and it inspired me to do some reading on the history of autofocus systems. Turns out that Honeywell invented autofocus and owns all manner of autofocus patents. They successfully sued Canon, Nikon, et al. back in the early '90s for patent infringement and won a nine-figure settlement. There are typically only a few good ways to solve a particular engineering problem. If Honeywell patented all of them for autofocus, and Olympus chose not to license those patents, then this may have left them to devise and implement a not-so-good way.

Again, pure speculation, but it's a simple explanation that explains the facts at hand. Please contact me if you’re in the know about these things.