I was looking for a new competition pistol in late 2012 when I saw CZ Custom advertising their CZ 75 SP01 Accu Shadow to shoot 3" groups at 50 yards, better than my S&P M&P could do at 7. That claim, seeing how the CZ 75 SP01 Shadow dominates IPSC Production, and shooting a friend’s CZs got me to order an Accu Shadow in early 2013. Switching to a steel-framed DA/SA pistol seemed like it would make for a challenging but worthwhile transition.

The CZ 75 offers a slim grip that fits small hands well along with a low bore axis and upswept beavertail that lets it nestle deeply in the shooter’s hands for solid recoil control. The slide rails are cut inside the frame, resulting in a lower-mass slide that cycles quickly. The steel frame, particularly with the SP01’s rail, also helps soak up recoil. It’s an ergonomic design that points naturally and runs fast. 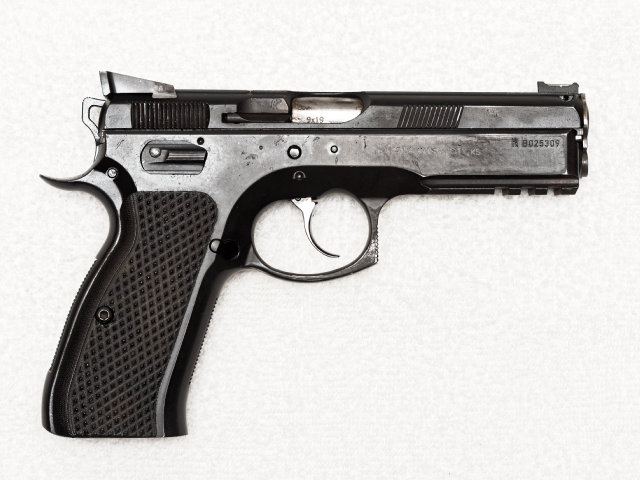 The pistol had been worked over by CZ Custom and given a smooth 8-pound DA pull and short, crisp 3-pound SA one. Worlds better than my friend’s factory CZs! In addition to polishing parts, the tuning process involves installing 11# recoil and 13# main springs. I changed these to 13# recoil and 11.5# main springs after further experimentation. The 11.5# spring has been 100% reliable setting off CCI and Fiocchi primers. For do-it-yourself types, start with tuning thread.

I worked the DA first shot hard in dry fire after getting the pistol and quickly began thinking of it as part of the draw, just like deactivating the safety on a 1911 becomes part of the draw. My first live-fire practice went well with the pistol proving extremely accurate. It was much easier to call my shots because the pistol placed the bullet right at the top of the front sight.

I got in another week of dry fire before shooting the pistol at a Steel Challenge match where I tied my previous best M&P scores. Things only improved from there. I took up USPSA in April 2013 and received an initial A-class classification after completing the requisite number of classifiers in August 2013. A year of solid practice got me to M-class in August 2014, and I’m currently working on laying down GM classifier times.

The pistol comes with slim aluminum grips partially covered in skateboard tape. They’re just okay, as the the flat shape does not fill the palm well and several critical areas are missing tape. I tried covering the panels entirely with skateboard tape. This helped with grip, but it didn’t help the shape and the tape also lost friction (and looked gross) as it filled with dead skin. Thinking back to the Gunner Grips for my 1911, I ordered a set of VZ Diamond Back grips. They’re as aggressive as they need to be and a perfect fit for my hands, as I can still hit the magazine release without having to twist the pistol in my hand.

Trigger-return spring and slide stop breakage are two known problems with the design. Either will disable the pistol. The factory trigger-return spring on my Accu Shadow broke around 9,000 rounds. The factory trigger pin is staked in place, and removing it required sharp hammer blows with the drift punch. The CZ Custom bench block has proven handy for removing this and other pins. I replaced the spring and pin with parts from Cajun Gun Works. Their spring is slightly lighter than the factory one for an easier trigger pull, and the pin uses a clever design to stay in place without staking. I’ve since switched to the CZ Custom spring, which is heavier and gives a more positive trigger return, which seems to reduce short-stroking the trigger when shredding close targets.

The HAJO rear sight also proved problematic. The height-adjustment screw broke in the middle of a course of fire, causing the sight to come loose and flop around on every shot—good thing the remaining targets were close! The hinge pin also broke and started to walk out during a match. Some tape kept it in place for the remainder of the day. Soon after that, I installed an SP01 Shadow Adjustable Rear Sight, which lasted a few thousand rounds before the windage-adjustment screw stripped a few threads, moving the blade a millimeter or two to the side. I didn’t notice this until shooting mini poppers at 20 yards during a match. The pistol now has a fixed CZ Competition Rear Sight.

The stock Shadow safety places the lever too low where it’s can be activated accidentally, particularly when performing a weak-hand transfer. I installed a set of thin safeties after this happened a few times.

Adjustable rear sights can and will break. I recommend using a fixed one.

Most CZs ship with an 0.125” wide front sight, which I find too wide for shooting mini poppers at 20+ yards. I like the thin profile (0.090”) and countersunk fiber channel of Dawson front sights. Height will vary with bullet weight, power factor, and barrel fitting. My Accu Shadow takes an 0.170” tall one and my SP-01 Shadow an 0.180” one, both using a CZ Competition Rear.

I’ve had zero problems with the SP01 18–round magazines after installing +10% springs, which are mandatory upgrades. These springs ensure that the top round is tight against the feed lips for reliable operation and also keep the rounds from bouncing around when the magazine is dropped on the ground. Other people prefer the chrome-plated 16-round magazines with rubber base pads. The steel on the 18–round magazines is a bit thin, and I swapped them out for Mec-Gar 16-round models with the anti-friction coating and Shockbottle base pads after straightening out the feed lips a couple times.

I went with the BOSS Holster and DAA Race Master magazine pouches. The former is fast as hell, and the latter are spendy but will last forever. I’ve never had a magazine fail to slide out smoothly or come loose during a match. The Blade-Tech holster is less than ideal, and I eventually replaced it with a Red Hill Tactical holster.

Keep an eye on the extractor, as crud builds up under it and reduces tension, leading to extraction problems. Every few thousand rounds, pull the extractor, give it a good scrubbing with a wire brush, and clean out the extractor channel with a dental pick.

I haven’t noticed anything special regarding lubrication. Remove the slide, pop out the barrel, and put a few drops of oil on all the contact surfaces and pivot points every few hundred rounds.

The following is a maintenance schedule that I’ve pieced together based on personal observations, recommendations for other steel-framed DS/SA pistols, and talking with other owners and gunsmiths. Yes, the firing pin really does shorten over time and needs to be replaced! Ben Stoeger Pro Shop, CZ Custom, and Cajun Gun Works stock a range of spare parts.

Barrel life will depend on the choice of ammunition. Jacketed bullets will wear out the rifling faster than coated. I wore out my first barrel just short of 40k rounds shooting a mix of the two. It was noticeable in that the pistol’s groups opened up. Replacing the barrel solved the problem immediately.

The most important spare part to keep on hand is a backup pistol. You don’t want to do surgery on a pistol in the middle of a match. Just grab the spare and drive on. That said, good parts to have on hand include: 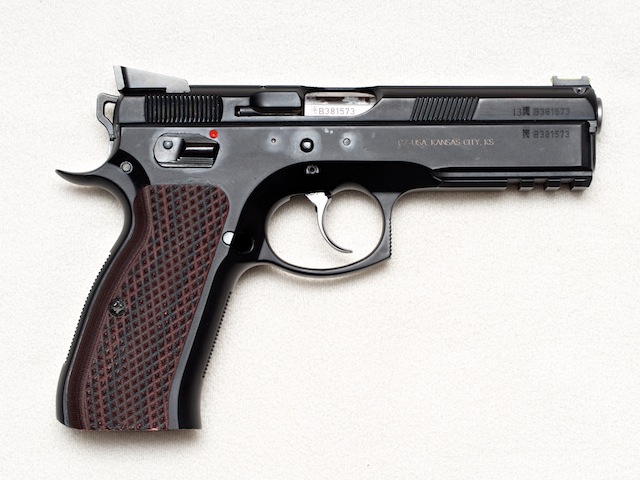