Ready to go for two weeks in Central Europe.

Grab shot in the courtyard of our rental apartment.

Abstract long exposure of the Hungarian Parliament building in a reflecting pool.

Roofline of the Hungarian Parliament.

A statue of Franz Liszt.

A sculpture of Sir Georg Solti outside the Franz Liszt Academy of Music.

One of the many racks of rental bikes.

Art Nouveau styling in the lobby. 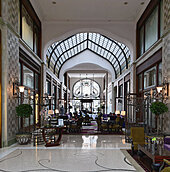 Looking out through the front door.

The lobby display for the elevator system.

Art Nouveau ornamentation on a storefront.

The ceiling of the synagogue.

The front of the cathedral.

Inside the dome of the cathedral.

Looking out across Budapest from the observation area around the dome.

The Hungarian National Bank from the observation area around the dome.

Andreas and Jennifer on the observation area of the cathedral.

Looking out across Budapest from the observation area around the dome.

Jennifer on the spiral staircase to the dome.

The dome of St. Stephen's Basilica.

Looking up at the dome.

The Hungarian National Museum from the Danube.

The Hungarian Parliament from the Danube.

Flowers above the entrance to Simpla Kert.

The mosaic in the lobby of the Franz List Academy of Music.

Art Nouveau ornamentation in the lobby.

The mosaic in the lobby of the entrance to the first-floor balcony.

Looking across the concert hall.

Gilded ceilings in the hallways.

Stained glass in one of the stairways.

Looking down a side hallway.

The upper house of parliament, now used for meetings and conferences.

A cigar holder with numbered spots to keep track of things.

Decorative sculpture outside a hair salon.

The first piece of street art in Budapest.

The first piece of street art in Budapest.

Owls in the window.

A vase from Ancient Rome gifted to Jože Plečnik by Josip Broz Tito.

Looking across the solarium toward the guest entrance.

The kitchen sink, made from a repurposed cemetery water feature.

The candle holder above the desk.

Materials on the bedroom table.

A water heater in the private guest area.

A solarium for growing plants.

Looking up at the office from the garden.

Jennifer by the solarium.

Detail of the garden wall.

Ljubljana from the castle hill.

Suited up and ready to go cave exploring.

A cave bear skull compared with a modern black bear.

A stalactite growing out of a hole in the ceiling.

Looking toward the cave entrance.

Our guide paddling toward a submerged rimstone dam.

A cluster of cave formations.

A cascade of limestone.

A group of formations that resemble a snail.

A hall of wonders.

Andreas and Jennifer at the far point of the tour.

Getting back in the boat for the trip to back to the entrance.

Jennifer at the base of Roman steps.

The organ pipes at the back of the cathedral.

The Triple Bridge with the Francisan Church of the Annunciation in the background.

A clearing storm over Ljubljana.

Sculpture on the Square.

Morning deliveries on our street.

Jennifer looking through a window in the stairwell.

Looking up at a natural bridge.

Jennifer on the gallery walkway.

Jennifer on the gallery walkway.

Jennifer in a grove of ostrich ferns.

Navigating through some downed trees.

The trail opening up to the outside.

Looking back over a rest area.

Passing by a patch of snow.

Jennifer on a ridge near the summit.

Clounds around the summit.

Clounds around the summit.

Owls with the summit in the background.

Jennifer lounging in an alpine meadow.

Jennifer on the trail.

Squawroot, a non-photosynthesizing, parasitic plant that grows on the roots of trees.

The Sava Bohinjka river valley, carved out long ago by glaciers.

The Sava Bohinjka river flowing through a rapid.

The initial section of the via ferrata route to the summit and the sketchy snow field that we needed to cross to get there.

Jennifer crossing one of the snow fields.

Jennifer moving past a pin.

Jennifer at the end of a via ferrata section.

Jennifer scrambling up some class 3 terrain near the summit.

Andreas, Jennifer, and owls at the summit.