A fine place to stay in Tucson.

A docent explainin the first stage of a Titan ICBM.

Looking into one of the combustion chambers of a Titan ICBM.

A view of the missile in its launch silo.

One of the horns comprising the microwave intrusion detection system.

A docent standing by the steps leading into the silo.

The hallway from the launch room to the missile silo.

An owl standing on one of the shock absorbers that cushions the launch complex.

Launch teams needed to enter the correct sequence into the butterfly valve lock for the missile to fire.

An owl at the launch console.

A dummy positioned as if to work on the missile.

The two sets of 300-psi blast doors leading into the launch complex.

It's more fun to hike with smugglers and illegal immigrants.

Fruits growing on a cactus.

A road runner perched on a rock.

I'll need to check this out next time.

Descending back to Montezuma's Pass

Two trees arching over the trail.

Land should have many uses.

Andreas at the border with Mexico.

An owl with the trash picked up during the hike.

An abandoned and unsafe to enter house.

A trio of weathered graves.

An owl hanging out with several toys left on a grave.

A grave marker succumbing to time.

The entrance to the Pima Air and Space Museum. 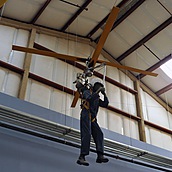 The ginormous afterburners in the SR-71's engines.

Note the offset nose wheel to allow mounting the cannon in the centerline of the airplane.

Andreas standing by an SR-71 engine.

The propeller from an F4U Corsair.

A former Air Force One reflected in a window.

Lots of mechanical stuff around the rotor of a Skycrane.

The interior of a B-17 showing the entrance to the ball turret.

A MiG-29 Fulcrum A interceptor.