Jennifer reading a book in the garden.

A colorful flower in the English Garden.

Jennifer standing on a bridge to the Japanese garden.

A pair of gardening gloves.

An inaccessible island in the middle of the garden.

A gryphon on the roof of the museum.

A selection of Chihuly macchia pieces. 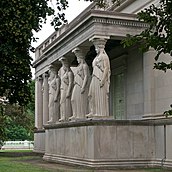 A quartet of columns holding up part of the roof.

Jennifer riding a bicycle in front of the museum.

Looking up at the Bahá'í House of Worship.

The tip of the Bahá'í House of Worship's roof.

The Bahá'í House of Worship from a distance.

A miniature take on Fallingwater.

Josh playing in a fountain.

Josh going for a big bubble.

Jennifer closing off a long bubble.

Josh walking his bicycle through some tall grass. 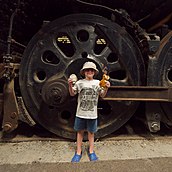 Josh and two owls standing in front of a train wheel.

Josh checking out the scenery outside the train.

Three section of curving tracks for moving trains around.

A pair of owls waiting for the train.